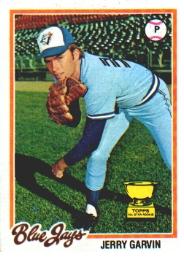 We are a long way from the days of Jerry Garvin

1) Travis Snider, OF, Grade A-: In the long run I’m not worried about the strikeouts, but might struggle at times in the early going.

2) Brett Cecil, LHP, Grade B+: I like him a lot. Love the strikeout/groundball combination.

3) David Cooper, 1B, Grade B: Almost went with B+ because I think the home runs will come.

5) Justin Jackson, SS, Grade B-: A high grade you might think. But I buy into the projection and I think he will ultimately hit.

6) Brad Mills, LHP, Grade B-: Impeccable numbers overall, but fly ball ratio is a concern and as a finesse guy he has to be perfect.

8) Ricky Romero, LHP, Grade C+: Another guy with a higher grade than you might expect given the numbers, but I will cut him slack one more year.

9) Mark Rzepczynski, LHP, Grade C+: I actually like him a lot, love the ratios and the grounders, but want to see at higher levels.

16) Robert Ray, RHP, Grade C: Looks like he could be a good utility pitcher.

17) John Tolisano, 2B, Grade C: Another young guy who couldn’t hit at , but could rebound.

18) Markus Brisker, OF, Grade C: Tools guy who looks like a sleeper to me.

19) Chad Beck, RHP, Grade C: Acquired from , has the arm strength to surprise.

20) Tim Collins, LHP, Grade C: Great numbers, great human interest story as a 5-7 lefty signed as a free agent out of high school. Yes I know he’s not really as good a prospect in the classic sense as some of the guys in the “other” category, but I want to point him out. He’s cool.

The Jays have been adding more tools guys lately, being more aggressive in (Fuenmayor, Chavez, Sierra) and drafting more high school kids, but so far the results have been mixed at best. Ultimately,however, I think that is the way to go: I prefer a balanced approach. I don't like it when teams draft nothing but high school guys, or college guys. I think they should draft both, mix the raw types with the polished guys.

I still really like despite his struggles last year, and will cut some of the others some slack as well due to youth. They’ve done a good job identifying useful college talent like Emaus and Campbell in the middle and later rounds. I think could be a steal if he’s healthy. Luis Perez looks like he could be a sleeper lefty.