Share All sharing options for: Cincinnati Reds Top 20 Prospects for 2009 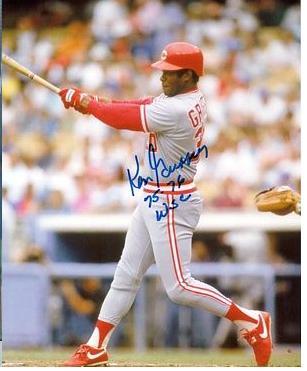 My favorite Cincinnati Red of all time is Ken Griffey Sr.

1) Yonder Alonso, 1B, Grade B+: Love the walks, strong power, but sharp platoon split keeps him from higher grade at this time.
2) Todd Frazier, INF, Grade B: I like him. A nice solid hitter, maybe not a star, but should be productive. Only question is defense.

3) Chris Valaika, SS, Grade B: I like him, too. Looks like a fine hitter, even without strong plate discipline. Probably more a 2B than SS.

4) Neftali Soto, 3B, Grade B: Very impressed with his long-term potential. Could use more patience, but strikeout rate isn’t bad and he’s very young.

5) Drew Stubbs, OF, Grade B-: Where did the power go? Other skills are coming along nicely.

6) Josh Roenicke, RHP, Grade B-: Very impressive arm, could be a closer perhaps.

8) Kyle Lotzkar, RHP, Grade B-: Might downgrade to C+. Very young, tons of potential, command and injury issues. This is one of my “intuition guys” though.

9) Daryl Thompson, RHP, Grade C+: He’s a solid pitcher if he can stay healthy, a big if. I’ve liked him since I shadow-drafted him out of high school.

11) Ramon Ramirez, RHP, Grade C+: Could rank as high as 8 depending on what you want to emphasize. Small right-hander with a strong arm, took step forward in ’08.

13) Matt Maloney, LHP, Grade C+: Another guy I have liked for awhile, could be a decent strike-throwing fourth starter.

14) Chris Heisey, OF, Grade C+: Like the speed, gets on base, could be solid fourth outfielder.

16) Dan Dorn, OF, Grade C+: Kills right-handers, could be a solid platoon bat.

18) Robert Manuel, RHP, Grade C+: One of several guys who could slot in nicely as a middle reliever.

20) Yorman Rodriguez, OF, Grade C: Too young and raw to rank higher in my system. Need to see some numbers first.

21) Juan Duran, OF, Grade C: Too young and raw to rank higher in my system. Need to see some numbers first.

The Reds graduated a lot of talent last year, and while things have thinned at the top, there is more depth in this system than is commonly realized. They have an interesting mix of polished college-type bats (Alonso, Frazier, Valaika), along with toolsy Latin American guys at the lower levels. While they could use some more impact arms, they have several pitchers who look like they will provide bullpen depth down the line. There’s quite a bit of C+ type talent here and guys who could be good role players.

Ranking players like Yorman Rodriguez and Juan Duran is difficult. I have usually not included many guys like that in the book until they hit , but will stick more in this year. I know what the scouting reports say on these players, and you will no doubt see them ranked much higher in other sources. But so many of the uber-tools guys fail completely that I just can’t go higher on these grades until we get something objective to examine. Even North American high school kids are easier to grade since scouts can often see them in showcase competition and get better reads on their ability.

Remember what Grade C means: “These are guys who have something positive going for them, but who may have a question mark or three, or who are just too far away from the majors to get an accurate feel for. A few Grade C guys, especially at the lower levels, do develop into stars.”