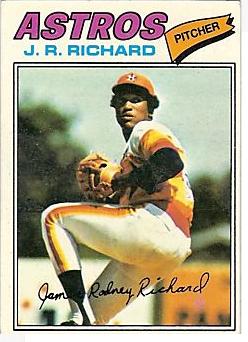 My favorite Houston Astro of all time was James Rodney Richard

1) Jason Castro, C, Grade B: Good glove, should provide some power, not sure if he’ll hit enough to be a genuine star or just a solid player.

2) Brian Bogusevic, OF, Grade B-: Good plate discipline, should hit for average, but lack of home run power may make him a fourth outfielder. However, you have to like the rapid adjustment he made, and the power may still come.

5) Ross Seaton, RHP, Grade B-: Another very projectable young arm and a local kid. For some reason I’m optimistic about him and Lyles.

6) Felipe Paulino, RHP, Grade C+: If healthy, could rank B- and ahead of Lyles and Seaton. Great stuff, but role and condition of arm are uncertain.

7) Drew Sutton, 2B, Grade C+: I see him as a useful role player due to broad secondary skills.

8) Chris Johnson, 3B, Grade C+: Hasn’t hit outside the Texas League. I’ve seen both Sutton and Johnson play. Johnson has better tools but Sutton is far more polished and skillful.

10) Chia-Jen-Lo, RHP, Grade C+: Hard to grade. Scouting reports indicate a polished guy who could be a decent fourth/fifth starter or a good long reliever, but doesn’t have upside beyond that.

11) Collin DeLome, OF, Grade C: Good power, some speed, but bad strike zone judgment will hold him back.

12) Sergio Perez, RHP, Grade C: Injured in regular season, but did well in Arizona Fall League. Could be fourth/fifth starter but might dominate more in the pen.

15) J.B. Shuck, OF, Grade C: Showed no power in college, but hit with authority in NY-P. Athletic, good plate discipline, more polished than Steele but not as much upside.

17) Federico Hernandez, C, Grade C: Very good defensive catcher, bat may be questionable at higher levels but at least he makes some contact.

19) Phil Disher, 1B, Grade C: Monster numbers in the NY-P League, excellent power, but horrible glove and high strikeout rate limit his grade at this time.

20) Tim Torres, SS, Grade C: Older prospect, but has some skills and could be on the Drew Sutton sleeper path.

This is an extremely thin system right now, but the 2008 draft looks somewhat promising and they seem to be taking the need to rebuild more seriously. I think Castro is pretty solid, but I think there were other guys available in the draft who would make bigger impacts. It says a lot about the system that the number two hitter was a pitcher a year ago. Sutton looks like a good role player to me, but I’m not totally convinced about Chris Johnson yet. Johnson has better tools, but Sutton looks more likely to actually live up to his potential. 2008 outfield draftees Steele, Shuck, and Austin are all interesting, but for very different reasons.

Pitching-wise, there are no definite impact guys right now. Norris has a lively arm but I have doubts about him as a starter. Lyles and Seaton could both be excellent, but they carry the risks typical for projectable young pitchers and won’t advance quickly. After that you have a bunch of fifth starter/reliever types.