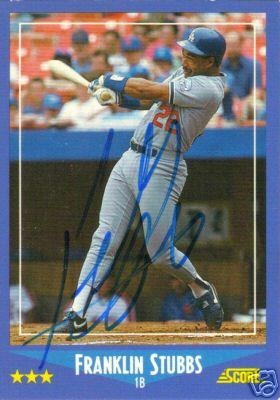 One in a long line of Mr. Albuquerques.

1) James McDonald, RHP, Grade B+: Same grade I gave him last year, see no reason to change it given his strong season. Only concern is fly ball tendency.

2) Ethan Martin, RHP, Grade B: Higher ceiling than McDonald but need to see how he adjusts to pro ball. Impressive power arm plus athleticism.

3) Ivan DeJesus, Jr, SS, Grade B: Took a step forward offensively, good glove, just needs to cut down on errors and get more consistent. I think his difficult Arizona Fall League was an aberration.

4) Andrew Lambo, OF, Grade B: Not sure about the glove, but the bat looks quite strong to me.

5) Josh Lindblom, RHP, Grade B-: Rapid riser from the college ranks, could help in the bullpen quickly.

6) Devaris Gordon, SS, Grade B-: I am giving him an aggressive grade. He’s raw, but immensely talented. I don’t think he is Preston Mattingly.

8) Scott Elbert, LHP, Grade C+: This might be a notch too low, but command and durability issues are still there.

10) Josh Bell, 3B, Grade C+: Making progress, but reports about weight are disturbing and he might not hit enough for first base.

11) Xavier Paul, OF, Grade C+: Should be a very solid fourth outfielder.

12) Chris Withrow, RHP, Grade C+: Need to make sure he is healthy. Ceiling is high but so is risk.

15) Pedro Baez, 3B, Grade C: Excellent power potential and a strong arm, but there is a 43.7% chance (to pull a number out of the air) that he is pitching four years from now. Horrible plate discipline.

16) Jaime Hoffman, OF, Grade C: Another guy like Paul who would make a good reserve OF.

20) Javy Guerra, RHP, Grade C: Good arm, fits better in the pen than he did as a starter.

The Grade Cs are interchangeable. As usual, don’t sweat so much about where the Grade C+/C types rank exactly on this list. After I get past the top 10 I don’t worry so much about exact placement, since I’m trying to concentrate on the book right now. Some of the Grade C guys could be C+ in the book, and vice versa. I can probably fit one more player in, so make a suggestion if you like.

The Dodgers system has thinned out a lot, and actually looks a bit weak right now, though I trust Logan White and his people to recharge quickly.

Ethan Martin has the most impact ability, but given the attrition rate for young pitchers, I want to see how he adjusts to pro ball. McDonald’s ceiling is not as high, but I can’t in good conscience lower his grade from last year. I think he will be a solid pitcher as long as he doesn’t get traded to or . I like DeJesus and it looks like Lambo can hit, though his glove doesn’t get good reviews and he might have to move to first base, reducing the value of his bat.

I’m giving Gordon an aggressive B-,which I guess may surprise some people used to more conservative ratings from me. There are quite a few arms here who have bullpen potential…Troncoso and Elbert close to the Show, plus several others further away.

Some of the Grade C guys at the lower levels have the potential to get higher grades once they prove themselves more fully, and this system could look much deeper a year from now.

Full reports on these guys and over 1,000 others can be found in the 2009 Baseball Prospect Book. Pre-order for January 31st shipping now!

You know you want to!