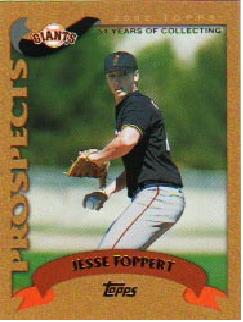 Tommy John is not an automatic happy ending

1) Madison Bumgarner, LHP, Grade A: Health is a risk as with any young pitcher, but incredible performance at a young age and improved secondary stuff stands out.

2) Buster Posey, C, Grade A-: Excellent defense, should hit for average with high OBP and at least moderate power.

3) Tim Alderson, RHP, Grade B+: Borderline A-. Doesn’t have Bumgarner’s stuff but pitched well at a higher level with great command.

5) Conor Gillaspie, 3B, Grade B-: I like the guys. Polished bat, will hit for average and get on base, glove needs to be more reliable but I think it will.

7) Nick Noonan, 2B, Grade B-: Strike zone judgment needs work but I like the other skills.

10) Rafael Rodriguez, OF, Grade C+: I have no idea where to rank guys like this. Could be anything from a superstar to a superdud.

11) Jose Casilla, RHP, Grade C+: Another power arm of interest, though a long way away.

17) Kelvin Pichardo, RHP, Grade C+: Another power arm who can help if he throws strikes.

18) Sergio Romo, RHP, Grade C+: In under the 50-inning rule  Great story, I like him a lot, but beware fly balls and unsustainable BABIP leading to regression to mean.

19) Jesus Guzman, 3B, Grade C+: Signed away from as minor league free agent. I think his progress was real.

20) Joseph Martinez, RHP, Grade C: Wins with marginal stuff. Can he do this in the majors?

SYSTEM IN BRIEF:
The system has three outstanding prospects in Bumgarner, Alderson, and Posey. After that the question marks start, with guys like Villalona and Gillaspie having notable strengths but also weaknesses that prevent a higher grade at this time.

The Giants seem to have a knack for finding spare pitching between the couch cushions, and are adept at picking up both power arms and more polished guys. You never know which young pitcher is going to go Foppert on you, so it is wise to gather as many as possible.

They have considerably less depth in position players, and at lower levels are relying on raw tools guys like Rodriguez and Fairley to carry the load. Even college pick Kieschnick is relatively raw. Don’t worry about Posey, though. I think the only thing that could derail him is injury, a risk for all young catchers.