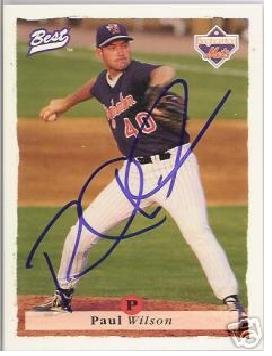 Even a Grade A pitching prospect is a risky investment

1) Wilmer Flores, SS-3B, Grade B+: I might take some flack for this, but in this case I think his upside is higher than F-Mart. If I could have just one of them, I’d pick .

2) Fernando Martinez, OF, Grade B+: Still extremely young, though at some point he’s got to produce better than he has. You can flip him with if you prefer the guy closer to the majors.

3) Jon Niese, LHP, Grade B: I’ve liked him since high school. He’s not an ace but should be a fine inning-eater.

4) Brad Holt, RHP, Grade B: Higher ceiling than Niese, but not as refined and command still needs work.

5) Reese Havens, SS, Grade B: Assuming he’s healthy, I think he’s going to be a strong across-the-board player with a high OBP.

6) Jefry Marte, 3B, Grade C+: Could be a star if it all comes together, but still rather raw. Considering B- but for me that’s aggressive for a rookie ball guy.

7) Jenrry Mejia, RHP, Grade C+ Pitching version of Marte: lots of talent, but skills are in the developmental stages and may not pan out.

8) Bobby Parnell, RHP, Grade C+: Stats don’t match scouting reports, but he has a good sinker and could be an effective setup man.

10) Nick Evans, 1B, Grade C+: Held his own after being rushed, which you have to respect, but he may just be a good platoon bat, not a regular.

11) Ike Davis, 1B-OF, Grade C+: I will cut him some slack for now. If he can’t hit, he could convert to pitching due to his strong arm.

12) Dillon Gee, RHP, Grade C+: Sleeper prospect has a decent arm, good command, and has risen rapidly in a short period of time. Could be better than many more-heralded guys.

13) Scott Moviel, RHP, Grade C+: Young and projectable, but if they rush him they will be sorry.

14) Scott Shaw, RHP, Grade C+: Sleeper prospect from 2008 draft, has above average stuff and showed better command in the pros than he did at .

15) Eric Beaulac, RHP, Grade C+: Another sleeper college arm, this one with a home state connection at LeMoyne.

16) Ruben Tejada, SS, Grade C+: Gets slack on the grade because he was massively rushed to the Florida State League. Controls the strike zone, has promise with the glove, very young.

17) Greg Veloz, 2B, Grade C+: Another young infielder who has been pushed fast but has some upside.

18) Michael Antonini, LHP, Grade C: I cut him at the last second from the 2008 book, though he still showed up on the grade list in the back of the book. Good changeup.

As usual, don’t sweat so much about where the Grade C+/C types rank exactly on this list. After I get past the top 10 I don’t worry so much about exact placement, since I’m trying to concentrate on the book right now.

If there are other guys you think should be included, let me know. Also, what is the deal with Nate Vineyard? I keep hearing he has quit baseball, but I haven’t found any details about this. I don’t want to dump him until I find out exactly what’s going on.

The Mets continue to make a big push in , and they seem to have a knack for finding some interesting pitchers in the later rounds of the draft. They like to rush guys quickly, particularly pushing the Latin American kids hard, F-Mart being the best example. Whether this helps or hinders development remains to be seen. They could use more depth in position players. They have the financial resources to be a lot more aggressive in the draft than they have been, so there’s really no excuse for this NOT to be a good farm system. I think it ranks about the middle of the pack right now. They have made significant progress and there is quite a bit of upside here, but more needs to be done.