Share All sharing options for: Texas Rangers Top 20 Prospects for 2009 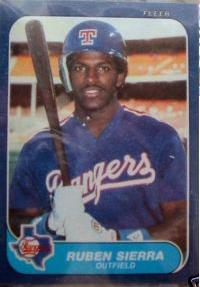 1) Neftali Feliz, RHP, Grade A: I don’t give out Grade As lightly, especially to pitchers. I might go down to A-.

2) Justin Smoak, 1B, Grade A-: I like him better than Alonso and Hosmer, and frankly I can’t believe the Rangers got him.

3) Elvis Andrus, SS, Grade A-: Should I go with B+ here? Athletic, very young for Double-A, I think the Renteria comparisons are apt and Andrus could be better.

4) Derek Holland, LHP, Grade B+: He’s great, but I worry that sometimes a step backward can follow such a breakout. Can he maintain late-season velocity?

6) Julio Borbon, OF, Grade B: I was too hard on him last year, and I buy into the idea that he can refine his game.

7) Engel Beltre, OF, Grade B: Read the comment below.

8) Michael Main, RHP, Grade B: Impressive Midwest League performance, and if instructional league reports are accurate he is primed for a huge breakout.

9) Max Ramirez, C-1B, Grade B: I love this bat. Glove might not be QUITE as bad as everyone says, but it isn’t good enough for him to rank higher.

11) Kasey Kiker, LHP, Grade B-: Almost reduced to C+ but something is holding me back. Not sure what, need to think about it.

14) Kennil Gomez, RHP, Grade C+: Breakthrough candidate if his arm is OK. I think he is right up there with some of these other guys who get more press.

15) Blake Beavan, RHP, Grade C+: Loss of velocity is disturbing, but other skills got better.

16) Wilfredo Boscan, RHP, Grade C+: Yet another breakthrough candidate. Low-A is gonna be loaded in '09.

17) Tim Murphy, LHP, Grade C+: Nice pick from 2008 draft, could advance quickly as an inning-eater if his command is there.

18) Wilmer Font, RHP, Grade C+: Huge upside, could easily rank as high as 12 if you prefer youth. Worried about injury nexus and command.

19) Tommy Hunter, RHP, Grade C+: He was rushed, but could still be a nice strike-throwing inning eater. Could rank as high as 12th if you want guys close to the Show.

20) Eric Hurley, RHP, Grade C+: Worried about health here. I held onto him too long as a higher-ranked prospect, but could do better with a change of scenery.

22) Omar Poveda, RHP, Grade C+: In danger of getting lost in the shuffle, but still interesting.

This is a very deep system and some tough decisions had to be made about who to include. I have room for ONE more player. WHO SHOULD IT BE??  Rangers fans are extremely knowledgeable, so give me your input.

As usual, don’t sweat so much about where the Grade C+ types rank exactly on this list. I'm concentrating on the book right now, and don't spend a lot of time on exact rankings here once I get past the Top 10.

The Rangers have three of the best prospects in baseball, several others who project as major league regulars, and a whole bevy of Grade C+ type guys, some of them breakout candidates for higher grades next year. I love the way they have run this farm system in recent years: they have mixed raw and polished talent in the draft, and have made a big push in . The Rangers are looking at every source of talent: college, high school, other countries, guys with tools, guys with skills. The result is a system with both depth and breadth, and the future of this organization is quite bright.