Share All sharing options for: Colorado Rockies Top 20 Prospects for 2009 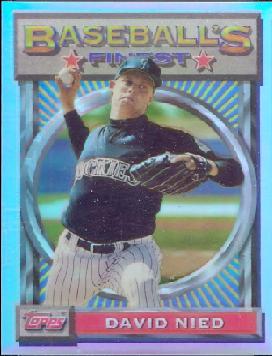 1) Dexter Fowler, OF, Grade A-: Great tools and skills are coming along nicely. Power is the main question…maybe a B+?

2) Jhoulys Chacin, RHP, Grade B+: Ground balls and strikeouts. I think he is still underrated to some extent, though Double-A will tell us a lot. If K/IP and K/BB remain strong, look out.
3) Christian Friedrich, LHP, Grade B: Borderline B-. Need to see at higher levels, but has a Zito-esque ceiling.

6) Michael McKenry, C, Grade C+: Borderline B-. Is C+ too low? Like the power and the caught stealings, worried about contact and error rate.

8) Aneury Rodriguez, RHP, Grade C+: What am I missing here? Why don’t other people like him? He’s young, has a live arm, and has pitched well.

9) Casey Weathers, RHP, Grade C+: Would rank third if not for Tommy John.

12) Will Harris, RHP, Grade C+: Live arm, good track record in A-ball, need to see at higher levels. I like him more than most do.

14) Hector Gomez, SS, Grade C: Missed year due to injury. Great tools, but his bat was pretty bad in 2007. Could turn into Angel Berroa. Is this too low? Most people would rank him much higher, but I’ve got big doubts about the bat.

16) Chris Nelson, INF, Grade C: Who the hell knows? Awful at , but hurt….then great in the Arizona Fall League.

17) Brandon Hynick, RHP, Grade C: He pitched much better in the second half, but lack of stuff precludes higher grade at this time.

18) Parker Frazier, RHP, Grade C: Very young, projectable, made big strides this year and is a sleeper for 2009.

20) Delta Cleary, OF, Grade C: Uber-toolsy guy is very raw but stands out for high ceiling.

This organization has really thinned out but there is still some talent here. I love both Fowler and Chacin, though both are right on the B+/A- edge. After that it gets murky, and there is a lot of uncertainty in the B-/C+ area. I might move Graham down and McKenry up a notch. Tools infielders with questionable bats like Gomez and Mayora are not easy to grade. I’ve seen so many of those guys fail over the years that my skepticism about them is pretty high at this point, at least until they show me something in Double-A. Chris Nelson is another enigma: he could hit .220 in Triple-A, or he could surprise everyone and end up contributing in the majors sooner than expected. The Grade C guys could move up and down the list easily and I just pointed out the ones who are most interesting to me.