Share All sharing options for: Oakland Athletics Top 20+ Prospects for 2009 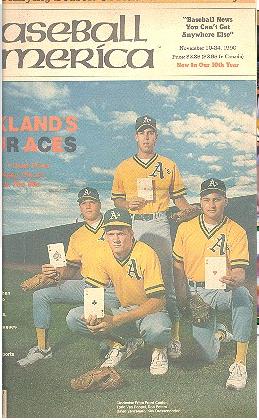 This is a deep system, but remember the lessons of history: Don't Get Arrogant

1) Trevor Cahill, RHP, Grade B+: Borderline A-. I like him an awful lot. Just needs to cut down on the walks a bit. Rate him just a tad higher than due to a better ceiling.
2) Brett Anderson, LHP, Grade B+: Borderline A-. Very close to Cahill, stuff not quite as impressive but more polished.
3) Aaron Cunningham, OF, Grade B: A solid all-around player. Doesn’t have the ceiling of some of these other guys, but a surer bet to reach his.
4) Gio Gonzalez, LHP, Grade B. This may seem too high to some, but even in the majors he struck out a batter per inning. I still like him.
5) Adrian Cardenas, 2B, Grade B: I think he’s a second baseman. Equivalent to a college junior entering 2009.
6) Chris Carter, 1B, Grade B: Enormous power, but defensive questions and spike in strikeout rate prevent a B+.
7) Jemile Weeks, 2B, Grade B. I like him a lot due to across-the-board skills, but I worry that he may be injury-prone like his brother, hampering his development.
8) Sean Doolittle, 1B, Grade B: I think he’ll emerge as a .270-.290 hitter with a solid OBP, 15-20 homers, and excellent defense.
9) Michael Inoa, RHP, Grade B-: Very hard to grade. Terrific scouting reports, projection, and youth stand out, but no track record and high attrition rate of young pitchers are big dangers.
10) Vin Mazzaro, RHP, Grade B-: I don’t know what to make of him. Everyone seems to be focusing on what he did at , ignoring what he did at , , and . I want to see more.
11) James Simmons, RHP, Grade B-: Excellent command, but hittable. Stuff may be a bit short to get beyond being a fourth starter.
12) Henry Rodriguez, RHP, Grade B-: Opposite of Simmons: blistering stuff but big command problems.
13) Josh Outman, LHP, Grade B-: Remains a personal favorite for me and I think he is underrated by others. Could be solid fourth starter or a very good reliever. Sort of a pitching equivalent of Cunningham: doesn’t have the ceiling of some others, but a surer bet.
14) Brett Hunter, RHP, Grade B-: Huge upside here, but command and health are issues until we get a bigger track record.
15) Andrew Carignan, RHP, Grade B-: Could help quite soon in relief.
16) Corey Brown, OF, Grade C+: Huge upside, but strikeout issues are a problem.
17) Andrew Bailey, RHP, Grade C+: I still like him. Could help very soon in the bullpen.
18) Tyson Ross, RHP, Grade C+: I think he’s an injury risk, but the upside is here.
19) John Donaldson, C, Grade C+: I think he’ll hit, but the glove looks like a problem.
20) Fautino De Los Santos, RHP, Grade C+: Enormous upside, but have to see how things look after Tommy John. I’m conservative about that.
21) Sam Demel, RHP, Grade C+: Love the strikeouts, command could wobble in Double-A.
22) Rashun Dixon, OF, Grade C+: Another enormous upside guy with question marks.
23) Jason Christian, SS, Grade C+: I thought he was a steal in the draft. Worried some about strikeout rate, like tools and other skills.
24) , RHP, Grade C+: Yet another interesting relief arm. Could rank higher.
25) Jesus Guzman, 3B, Grade C+: Nice pickup as a minor league free agent. Still young enough to be interesting sleeper.
26) Petey Paramore, C, Grade C+: Great glove, lots of walks, doubts about rest of bat.

SYSTEM IN BRIEF:
This system has a huge amount of depth now, but other than Anderson and Cahill even the potential impact guys have a few doubts about them. I opted for a conservative approach on a lot of these grades. Inoa was a tough grade, but decided to approach him like a high-upside high school kid entering his draft year. He could be literally anything from Juan Marichal to a guy who shreds his shoulder in rookie ball and is never heard from again.
I expect complaints about ranking Outman ahead of guys like Hunter and De Los Santos, and perhaps I just like him so much because I’ve been tracking him since college, but I’m going with my gut on that one. Certainly some of the guys behind him have higher upsides, so adjust your own ranking accordingly depending on what you like yourself.
Overall, this system has dramatically improved over the last couple of years thanks to aggressive trades and impressive drafting. I like how they have mixed polished talent and upside guys in recent drafts.