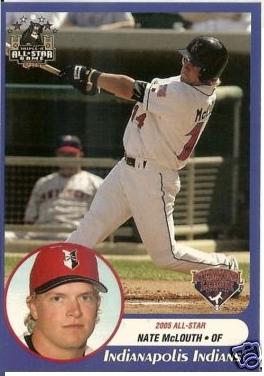 Nate McLouth won a Gold Glove today. Most fans know litlte about him, so I thought he would be a good candidate for a prospect retro.

McLouth was drafted in the 25th round in 2000, out of high school in Whitehall, Michigan. Originally a second baseman, he was considered to be a good athlete with a measure of baseball polish, but was undersized at 5-10 and had a firm committment to the University of Michigan. He signed late but he did sign, then made his pro debut in 2001 as an outfielder.

It was a successful debut: .285/.371/.464 with 21 steals in 96 games for Hickory in the Sally League, skipping short-season and rookie ball entirely. Although he didn't receive much attention, his performance for Hickory was excellent: +23 OPS, with strong plate discipline and broad skills. I gave him a Grade C+ in the 2002 book, noting that he was "the definition of a sleeper."

Moved up to Lynchburg in the Carolina League in 2002, he slumped, hitting just .244/.324/.392 though with 20 steals in 114 games. He retained good command of the strike zone, but his production dropped off in most categories and he looked overmatched much of the time. Granted, he was just 20 years old. I did not put him in the 2003 book for space reasons, but had him rated as a Grade C prospect, though still very young.

Returned to Lynchburg in 2003, he rebounded with a .300/.386/.411 mark, with 40 steals in 44 attempts and a +14 percent OPS. Again, his strike zone judgment was very strong. I wrote that McLouth was one of several "outfield prospects in the walk/steal category" that the Pirates had, and that he could "end up as the best of the lot." Grade C+.

Some scouts were still skeptical about how he would fare against advanced pitching, but he answered those questions in 2004, with a .322/.384/.462 mark with 31 steals for Double-A Altoona. He was now getting attention for strong outfield defense as well. I gave him a Grade B- in the 2005 book, liking the broad skill base but projecting him as a really good fourth outfielder but possibly not a regular if the power did not maintain.

McLouth has always had good physical tools, strong baseball skills, and a terrific work ethic. What he lacked was size and home run pop. The power spike over the last two seasons has pushed him beyond the fourth outfield role and wasn't really predicted by his minor league track record, though in the minors he did show respectable pop at times. He turned 27 a few days ago and is now entering his peak seasons. It will be interesting to see if he gets better than he already is.