Share All sharing options for: Chicago Cubs Top 20 Prospects for 2009 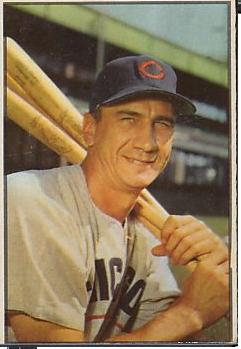 Hank Sauer, my mother-in-law Gwen's favorite player as a kid.

1) Josh Vitters, 3B, Grade B+: Hopefully the home run power should start to come in 2009. Great contact hitting skills and still very young.

2) Jeff Samardzija, RHP, Grade B: I have no idea what to expect here. Could be great, could be horrible, track record very erratic.

3) Ryan Flaherty, SS, Grade B: Looks like a solid all-around player to me.

9) Dae-Eun Rhee, RHP, Grade C+: Would rank higher if not for Tommy John.

13) Dan McDaniel, RHP, Grade C+: Lots of strikeouts and grounders at . Command an issue. Could rank as high as 10th.

14) Micah Hoffpauir, 1B, Grade C: Too old to rank higher but he has a major league bat. Where does he play?

15) Esmailin Caridad, RHP, Grade C: Low strikeout rate a concern, but I think he can do well in relief.

16) Don Veal, LHP, Grade C: Stock has fallen massively due to command and mechanical issues. Not protected for Rule 5, which tells you a lot.

17) Josh Kroeger, OF, Grade C: He finally learned some plate discipline and has done well in Triple-A. Getting old for a prospect.

19) Chris Carpenter, RHP, Grade C: Command problems and poor health record reduce stock, but he throws very hard and has upside if he can stay away from doctors.

I really like Jay Jackson and I think he is going to surprise a lot of people. Colvin is a weird case, he actually played worse when he was trying to work the count, and better when he went back to hacking, as Kevin Goldstein of Baseball Prospectus has pointed out. I have some more thoughts about that in the book.

The Cubs system has thinned out, and there is no one with impact hitting potential at the higher levels. Guys like Vitters, Flaherty, and the AZL tools guys give hope that that could change in the future. Samardzija is completely unpredictable, he could be the second coming of Bobby Jenks or he could totally flame out. It wouldn’t’ surprise me if Cashner ended up the same way, alternating good and bad runs and leaving everyone scratching their heads.

Next up: the Boston Red Sox, followed by the Cincinnati Reds.