Share All sharing options for: Philadelphia Phillies Top 20 Prospects for 2009 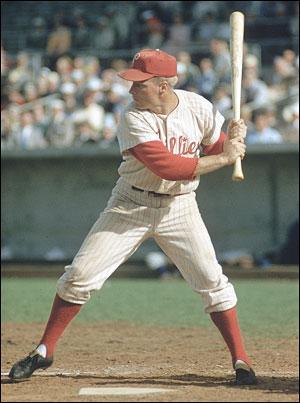 Richie Ashburn had tools AND skills

1) Carlos Carrasco, RHP, Grade B: High ceiling, made progress this year, still erratic. Maybe a B+?

2) Michael Taylor, OF, Grade B: Made huge progress refining his tools. Want to see Double-A numbers.

3) Travis D’Arnaud, C, Grade B: Good defensive catcher with rapidly improving bat.
4) Jason Donald, SS, Grade B-: Still doubt he has the range for shortstop. But I like the bat a lot. Borderline Grade B?

5) J.A. Happ, LHP, Grade B-: Made big progress in second try in Triple-A. Still see him as Mark Redman type.

9) Joe Savery, LHP, Grade C+: I held onto him as a Grade B for too long this year, components don’t support it.

11) Kyle Drabek, RHP, Grade C+: Could rank much higher if command is back after Tommy John. Will know more by mid-season 2009. Performance has not matched hype but still young.

12) Greg Golson, OF, Grade C+: Most people will think this ranking is too low, but I still have serious doubts about his bat. Has made some progress but discipline remains dreadful.

16) Antonio Bastardo, LHP, Grade C+: I’ve overrated him in the past, but still see potential here.

17) Anthony Gose, OF, Grade C+: Willing to be a little patient here due to tools, but high risk.

18) Chance Chapman, RHP, Grade C: Old for the level, but good numbers this year and I saw him in college, has a nice slider.

19) Anthony Hewitt, OF, Grade C: Quite frankly, Anthony Hewitt sucks as a baseball player right now. I will cut him some slack due to his tools and youth, but I am very skeptical about his bat.

20) Jeremy Slayden, OF, Grade C: The exact opposite of Hewitt, Slayden has mediocre tools but good baseball skills. Main problem is age-relative-to-league.

The Phillies are very tools-oriented when it comes to position players. I can understand it, but sometimes I think it gets excessive. Drafting Collier AND Gose AND Hewitt is putting an awful lot of chips on one class of player. Personally I prefer a broader approach, mixing tools guys with more polished players too. I have a lot of skepticism about Hewitt at this point.

On the other hand, I like the pitching they picked up this year, and they aren’t afraid to take chances on guys like Drabek and Shreve that other teams might shy away from. They’ve shown guts when drafting.

Reports on these players and over 1,000 more can be found in the 2009 Baseball Prospect Book, available for Pre-Order at JohnSickels.net. The book ships January 31st, 2009.

Next up will be the Tampa Bay Rays, followed by the Arizona Diamondbacks.